Keri made me watch it.  I didn’t want to. I watched it when it first came out in the mid 80s when I was about 8 years old.  It was creepy. Do you remember The Neverending Story?

Bastian is a boy bossed around by his dad and bullied by schoolmates, all the while grieving the death of his mother. The story is about finding hope and meaning through the power of imagination and story. Bastian is losing hope in a world filled with pain and suffering, and quickly losing confidence in himself as he seems to have no one around who believes in him.

Bastian seeks refuge from three bullies in an old bookshop where he encounters the cranky old Coreander. Coreander is pleasantly surprised when he finds out Bastian loves to read great adventure books like Lord of the Rings, Tarzan, and Robinson Crusoe. After listing some of his favorites Bastian’s eyes are captured by a magical looking book resting in the old man’s hands.  Here’s the conversation that follows:

Bastian: What’s that book about?

Coreander: Oh, this is something special.

Bastian: Well, what is it ?

Coreander: Look. You’re books are safe. While you’re reading them you get to become Tarzan or Robinson Crusoe.

Coreander: Yes, but afterwards you get to be a little boy again.

Bastian: What do you mean?

Coreander: Listen (he motions for him to come nearer.) Have you ever been Captain Nemo, trapped inside your submarine while the giant squid was attacking you ?

Bastian: But it’s only a story.

Coreander: That’s what I’m talking about. The ones you read are safe.

Bastian: And that one isn’t ?

“Your books are safe,” says Coreander.  What does he mean?  He seems to mean this: “You read books at leisure for some light entertainment.  You go as far as you want and put the book down when you get bored, scared or tired.  You always place yourself in the shoes of the hero as you read, always saving the day and escaping suffering and death.  Rarely do you associate yourself with the angry villain or tragic victim. You use books as a temporary escape to other worlds but always come back to reality unchanged. And so your books are safe.” 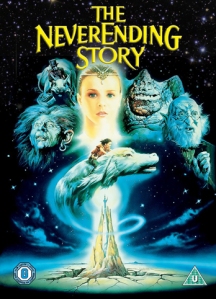 Oh, but Coreander holds in his hand a book that is somehow different.  He leans forward and whispers it, as if he holds in his hands the Story unlocking the secret of the ages.  Perhaps he does.  The secret Coreander longs to share with the young boy is that stories have the power to pull a person out of the realm of safety and into a new world discovery where great and glorious things are possible.  Most significantly, all who find themselves living within this Story will never be the same again. The Story changes us.

“The original film focused on a boy named Bastian Balthazar Bux who discovers a parallel world in a book. As he delves deeper into the book, he finds his own life increasingly intertwined with the novel’s plot. In the book, a hero in the land of Fantasia must save the universe on behalf of an empress” (From The Cleveland Leader).

The particular message of The Neverending Story is more or less that our imaginations holds great power and potential.  The movie tells us hope and confidence can keep us from sinking in the swamps of sadness and despair.  Our imagination can create new worlds of our own making like Fantasia.  Fantasia is symbolic of a young person’s wide-eyed idealistic dreams and naive optimism so precious in children but so rare in “grown ups.” The great villain of the movie is The Nothing, which symbolizes the despair and sadness that takes over one’s entire life in the wake of a tragedy, or the loss of imagination and creativity that plagues so many people enslaved to the monotony of everyday life.

For me personally, however, the opening scene quoted above of Bastian’s exchange with Coreander brings me back to my own encounter with a Story that “is something special” and certainly not safe. I was a college sophomore when I first opened up to the Book of Acts in the New Testament. I had long heard of the many ways the Bible was different than other books.  I felt as though inside those ancient pages were hidden all the secrets of the ages and the answers to all the world’s greatest questions. I believed God’s very words to humankind were revealed inside. Yet, I was unable to connect with the Bible.  One significant obstacle still kept me from encountering the transforming power of God’s Story: I did not see myself as part of this Story.

Unlike Bastian in his readings of the great books, I had not allowed myself to get swept up into the Story, to find my place and assume my special role.  But much like Bastian, I suppose I preferred a “safe reading” of the Bible where afterwards I could “get to be a little boy again.”   That night in the Dining Center of Bethel University I was transported, like Bastian, to a whole new realm of living.  In the Book of Acts I discovered myself part of an epic journey in the fellowship of God’s people on a mission to the ends of the earth. The hero has already come and saved the world caught in the strong grip of sin and death. My mission is to go in the power of the Spirit to announce the good news of Jesus Christ and the Kingdom of God to a world in need of a savior.

Like Bastian and The Neverending Story this Story is not safe. I can never go back to being a boy again. I am in a Story from which there is no escape. I have discovered my meaning, value and purpose within the Story. I have a renewed confidence and hope in the God who like Falco the Luck Dragon carries me “on the wings of eagles” and pulls me out of my own mud pits of despair. I have a Savior in Jesus who, like Atreyu the boy-warrior, has fought bravely and sacrificed to save the beloved Empress.

As for the rest of the movie, don’t bother. I loved this one scene alone. The rest of the movie features horrid special effects backed by an awful 80s soundtrack set in a fantasy world that surely had Tolkien rolling over in his grave filled with ridiculous creatures such as the Rockbiter, a Racing Snail, G’mork the angry wolf and our favorite floppy-eared, creepy-eyed dog-dragon Falcor. Kids who have grown up with Peter Jackson’s Lord of the Rings films should watch this film just to gain a greater appreciation for the huge leaps Hollywood has taken in cinematography and special effects in the past 3 decades. Lucky for you kids a remake looks likely.

Do you still read the Bible as an ancient book about distant people, places and events far removed from your own life?  Is your everyday life and Christian faith void of a grander vision and purpose-filled adventure and risk?  Is your faith in Christ and understanding of Christianity far too safe?   My prayer is that you will suddenly find your life swept up into the Story yourself and find your entire life reoriented around it’s exciting, death-defying plot and life-giving promises!

Daily Illumination blog contains thousands of Jeremy’s articles from the intersection of faith & life. Search by topic below, or explore featured series on the Articles page in the main menu.

A Ministry of MainStreet Covenant Church