Built roughly 2,700 years ago, long before the invention of GPS and laser level, Hezekiah’s Tunnel is one of Jerusalem’s most incredible landmarks. Even by today’s standards, the construction of his 1,750-foot long subterranean passageway is an extraordinary feat of engineering. The Gihon spring—Jerusalem’s only freshwater source essential to life in the city— is situated on the outside of the City of David. The natural spring once poured water into the Kidron Valley outside the city, providing rich soil for crops. 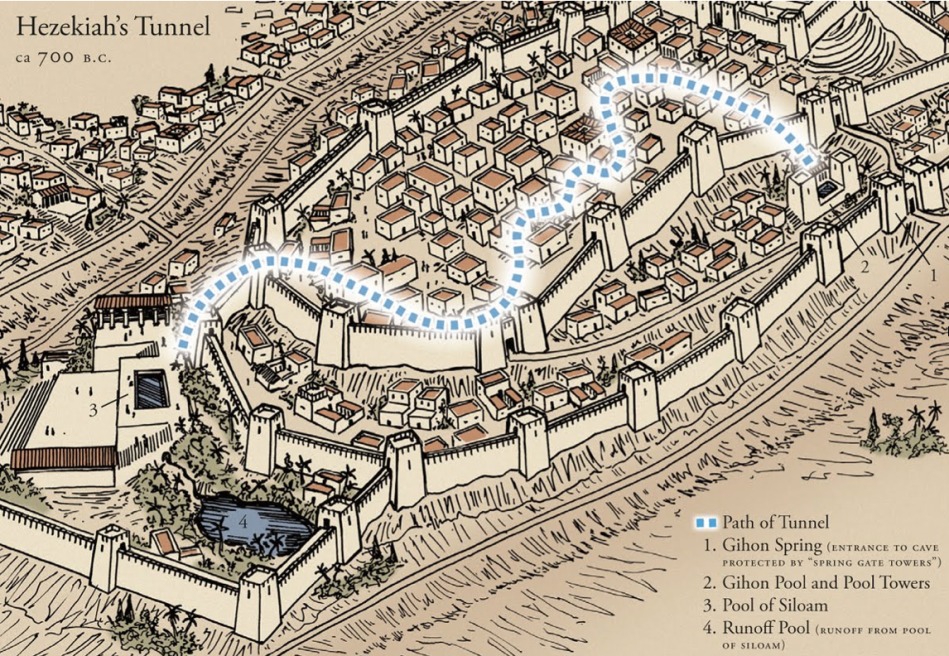 Then in the 8th century as news reached Jerusalem of possible attacks by the Assyrian army led by the ruthless general Sennacherib, King Hezekiah decided to begin diverting the water from the Gihon Spring to inside the fortified city wall, preventing access to the encroaching Assyrian army. As we read in 2 Chronicles 32:2-4:

“And when Hezekiah saw that Sennacherib was come … He took counsel … to stop the waters of the fountains which were outside the city … So there was gathered much people together, who stopped all the fountains, and the brook that ran through the midst of the land, saying, “Why should the kings of Assyria come, and find much water?”

While packing for the trip I failed to find my water shoes I recently purchased for the Boundary Waters, so I was not sure I would be able to join the group for the tunnel adventure. The water of the Gihon spring still gushes through the tunnel, up to a normal person’s waist at the beginning and up to the shins for the rest of the six football field long journey. Fortunately another big-footed fellow on our trip, who falls in the claustrophobic camp, gladly offered me his size 15 water shoes. (One brave gal from our group who forgot her water shoes at the hotel was determined to not miss out and talked the entire thing in her bare feet! Before you pity or praise her too much, a tunnel where water has been gushing for thousands of years is actually very smooth on the feet and very clean.)

So, alas, a small and adventurous group of seven or so of us, said farewell to the other 40 people in our group, and jumped into the channel and began a 30 or so minute walk back into the past, rubbing our fingers along the walls, feeling for ancient axe markings, and learning very quickly just how much shorter the average man was in the year 700 BC! At first the water is up to your waist, but quickly goes down to shin level for the rest of the way.

Bent over in a dark tunnel, sometimes unable to straighten my back for a hundred feet or so, I felt like a character from Dante’s Inferno. Thankfully Graham and Peter were not far behind me, making jokes and Peter capturing much of the experience on his fancy video camera with spotlight.

The snaking channel was dug through solid rock, by crews of men digging from both directions. This bold strategy of tunneling from both ends meant the tunnel could be dug much faster. We don’t know how long it took, but estimates range from nine months to four years. Even today, many scientists are baffled about how the teams successfully met in the middle.

So, now let our minds wander back to our spiritual journey through this life that often feels like a dark and winding tunnel with bent backs and cold wet feet. We’ve heard stories all our lives of a God who dwells in unapproachable light and whose son came to offering an endless spring of Living water for tired and thirsty souls who would find their way to Him. Walking through that dark ancient tunnel, I imagined one of those tired lonely axe-swingers of old trying to earn a honest day’s wage in that tunnel 2,700 years ago, putting the the cares of his family up above into every swing of the axe—perhaps a sick child, a starving household, a quarrelsome marriage, or his faith in the God of Israel running low as an enemy army waits at the gate to show who is really to be feared. Maybe he uttered with every strike of the chisel the same prayers the Orthodox Jew utters today at the Wailing Wall. History’s tunnel of sorrows is long indeed.

We know the contours of the prayers all too well: Will there be a light at the end of this long tunnel? Is the Living Water we’ve been told about real or just the stuff of fantasy and fable? Am I alone in this dark passage and am I headed toward a dead end? Could there really be Someone chipping away on the other side, working their way toward me? And what are the chances their long and circuitous route will possibly meet up with the twisty trajectory my life has taken to get me here? 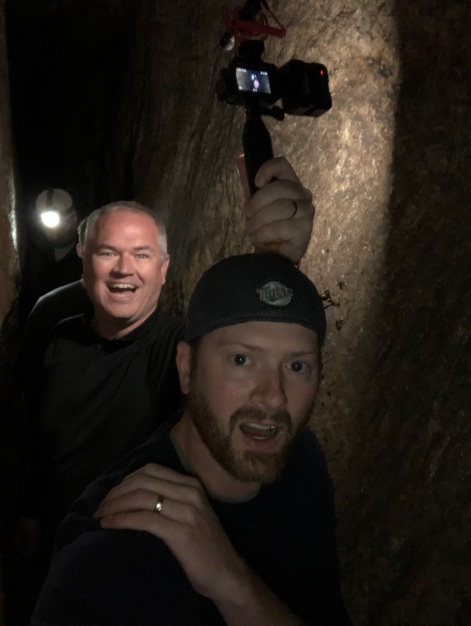 Well, by now my back is sore as we pass the halfway point. I distract myself from the pain by howling the signature note from the Frozen 2 soundtrack—“Oooo ooh oooooh ooh.” My companions sing the echo and we laugh. Then we break into the songs of the Seven Dwarves from Snow White and imagine we are Sleepy, Happy, Dopey, Bashful, Sneezy, Grumpy and Doc whistling while we work our way toward the finish—if the door hasn’t finally caved in by the earthquake that is overdue.

As the trek began to drag on and as my back began to truly cramp up, our hopes were lifted by the welcome sound of singing. We couldn’t make out where it was coming from or what language the hymns were in—but it sounded joyous and friendly. We kept walking as the sound grew closer. At first we thought it was coming from above us, possibly in some chapel we were passing under. Then we thought it was coming from ahead of us, bidding us onward. In the end, it was a chorus of Japanese men coming steadily from behind us, singing what sounded like Christian victory songs that helped push us toward the light of our own Easter-like emergence from Hezekiah’s tomb-like tunnel.

Near the exit of the tunnel the ceiling gets very high, and my theory is that this portion was dug by an ancient basketball team, or the Nephilim of Genesis 6. :) An inscription was found in the 1880s near the exit, that celebrates the project completion.

We lived into another famous biblical story as we neared the exit of the tunnel. We know that certain subterranean creatures dwell their entire life inside the earth in utter darkness,  and therefore have never developed eyes to see with. One key aspect of Jesus’ ministry was confronting people who had dwelled in spiritual darkness their entire life, and were therefore without spiritually eyesight. The Gospel writers place stories of physically blind people being healed by Jesus right next to stories of spiritually blind people still needing to come into the light. One such story is of a blind man for whom Jesus spat in some mud, rubbed onto his eyes and told him to go wash in the pool of Siloam.

The water of the Gihon Spring still rushing under our now soggy and wrinkly feet  used to flow directly into the Pool of Siloam, situated at the southwestern end of the City of David. Our dark trek through one of history’s marvels ultimately led us out into the bright sunshine gleaming off the white stones of the Pool of Siloam where an unsuspecting beggar blind from birth met the One who flipped the light on for the first time—physically and perhaps spiritually as well. His words still echo forth in chapels all over the world today every time “Amazing Grace” is sung: “I was blind, but now I see!” And after walking in the dark for the past 30 minutes, we were blinded by the light as we stumbled out of Hezekiah’s Tunnel and sat down to rest at the Pool of Siloam.

It’s appropriate that the dark tunnel that so often represents the life of walking by faith and not by sight would lead those who keep walking forward, carried by the sounds of singing saints above, rubbing our hands across the axe markings of those who have gone before us—that this tunnel would lead us directly into the healing pool of the Savior.

The most important lesson to take away from this tunnel experience is the reminder that we are not left to our own devices, swinging away and trying to literally move earth in search of finding Heaven’s light. No, the scandal of the Christian gospel is that Heaven put on a hard-hat and headlamp and came down in search of you and me—and often meets us halfway in the middle of the deepest, darkest place. No matter how twisty and snakelike our path, the Light of Salvation will always meet us where we need Him.

This also means that while some of us are blessed with the chance to cross the ocean and go on pilgrimage in search of a special encounter with God, we discover God has already beat us to it. Christ has been tunneling a way across Heaven and across the ocean, to encounter us here and now in our everyday places. If we fail to see him somedays, let’s keep wiping the spiritual mud out of our eyes and keep trying. “For lo, I am with you always, even to the end of the age” (Matt 28). 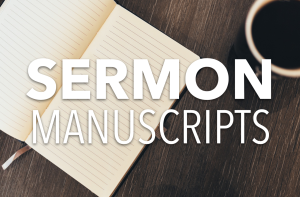