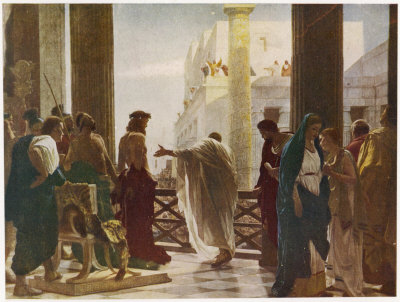 “Now it was the custom at the Festival to release a prisoner whom the people requested. A man called Barabbas was in prison with the insurrectionists who had committed murder in the uprising. The crowd came up and asked Pilate to do for them what he usually did.”Do you want me to release to you the king of the Jews?” asked Pilate, knowing it was out of envy that the chief priests had handed Jesus over to him. 11 But the chief priests stirred up the crowd to have Pilate release Barabbas instead” (Mark 15:16-9).

Remember Barabbas?  The crowd cried for his release and sent Jesus to be crucified.  Did you know that some of the Greek manuscripts reveal his full name: Yeshua bar Abba which translates roughly to “Jesus son of the Father”?  That’s right.  If these manuscripts can be  trusted then the crowd was choosing between two different sentenced men named “Jesus.”

Many have speculated on the significance of this name.  Tony Campolo, in his short book Which Jesus? highlights the key differences between the two men and their missions.  Jesus Barabbas was notorious criminal, most likely a political revolutionary or Zealot  — “a terrorist” (CEV) — who was fighting on behalf of the Jews to violently overthrow Roman imperialism.  He was condemned to be crucified for his revolt against the state.  Campolo calls Jesus Barabbas’ way to freedom “the way of power.”

On the other hand we have Yeshua bar Joseph which translates to “Jesus son of Joseph.”  Jesus is also arrested under suspicion of being an enemy of the state — not a violent revolutionary but a messianic figure claiming to be the “King of the Jews.”  This

Jesus’s mission is also to bring freedom to the Jews.  Yet, the freedom he is bringing and the kingdom he is restoring to Israel does not come through violent, national militarism.  Campolo calls Jesus bar Joseph’s way to freedom “the way of love.”

Two very different Jesuses.  Two very different paths to freedom.  As we reflect upon the Cross this Good Friday, we do well to ask again the question: Which Jesus do we trust today?  Which path do we trust to move the Kingdom of God forward in the world today?  Do we believe God is accomplishing his purposes in the world by power and militarism — the way of Jesus Barabbas?  Or do we believe God is still accomplishing his greatest works through acts of sacrificial, cross-shaped love — the way of Jesus bar Joseph?

0 comments on “Which Jesus do you choose?”

The Book of Revelation’s Message for Today